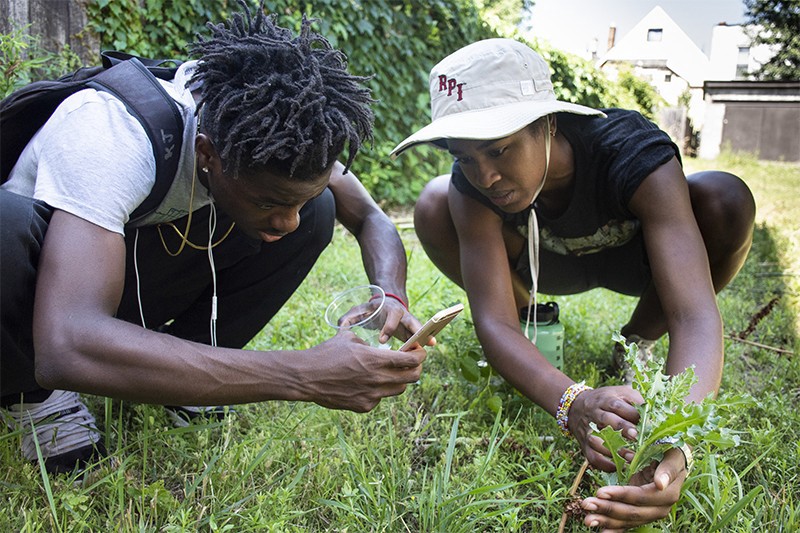 Urban nature, which had previously had a primarily aesthetic function in the urban landscape, became outdoor classrooms and playgrounds for children and oases for meditation, work, and victory gardens for everyone else. In times where social distancing has become the norm, loneliness, anxiety, and depression loom; ironically, it exists mostly amongst people living in dense urban settings. In times of great uncertainty, green space has provided and continues to provide great relief while still allowing for social distancing. Green spaces give people a chance to get away from it all, even if it’s only for a little while.

Research has shown the powerful effect of nature on mental health. Exposure to nature is a prerequisite for urban survival. A lack of nature in childhood has been recognized as nature deficit disorder, but children can gain mental health support from exposure to urban nature every day. Lower cortisol levels and decreased anxiety disorder treatments in adults have all been associated with a lack of exposure to nature.

However, in the age of a pandemic, urban nature provides more than a mental health boost. Urban nature offers access to other virus-fighting agents, like space for regular exercise and exposure to vitamin D, which has been proven to prevent and treat coronavirus. A vitamin D deficiency rapidly compromises immune system function. Recent research revealed that vitamin D levels are severely low in ageing populations, especially in Spain, Italy, and Switzerland, which are the same places that saw increased mortality due to the coronavirus.

Despite its benefits, nature in cities is not exactly a given and most definitely not a human right. In the UK, 75% of children spend less time in nature than prison inmates, which adds up to less than two hours a day. Humans in general spend up to 90% of their lives indoors. People aren’t just not going outdoors; the outdoors is also disappearing. Despite widespread media attention on the importance of greener cities, tree canopy cover has decreased in American cities in the last five years.

In a world of cities, nature holds the biggest promise and cities need to reinvent themselves to unlock the latent potential of nature. An “outdoor city” is the key to amplifying nature and the value of the outdoors for urban dwellers. An outdoor city is a community that prioritizes outdoor recreational infrastructure and citizen-engagement around conservation stewardship. The outdoor city can take many forms, and many shades of green (and blue). Cities like London, Amsterdam, Paris, and Melbourne are reclaiming blacktop and redeveloping spaces into multi-purpose green spaces. A network of trees can create a quilt of “tiny forests”; bioswales can capture and direct groundwater runoff; and fields and parks can double as recreational places as well as areas to foster urban resilience by helping a city absorb extreme weather events, like hurricanes or tidal floods.

The rise of the Internet of Nature

An outdoor city is possible today because of technology. While there is certainly a dichotomy between technology and nature, digital applications can boost our ability to care for nature. Recent advances in smart city technology and planning have helped even the most mundane civic tasks and responsibilities undergo a digital transformation. From bike shares to waste management to public transit to street lighting, everything has a digital component. So why has nature been left behind?

In the same way, precision agriculture and its ag-technologies can boost farmland production, digital applications applied to urban ecosystem services can create the “Internet of Nature” (IoN). This includes measuring and monitoring the health of urban ecosystems while also using technology to engage city residents and visitors in stewardship. Never before have we had such a ubiquitous blanket of technology covering the planet. With our mobile smartphones, each one of us is caring for our very own supercomputer. Imagine the data that can be collected to inform the way we tend to urban nature, such as regular updates on plant phenology, invasive species, wildlife migration, drought prevention, and downed trees or branches. We can also use that data to show the need to populate citizen response in a regular call for volunteer help, policy reform, or to drive project-based donations.

From sensor networks for real-time soil monitoring, mining social media for public opinion on green spaces to drones for pest detection and remote sensing for ecosystem services analysis, the IoN can be applied in several different ways. The idea is to digitally represent aspects of urban nature and connect it to wider city communication networks and systems. When several of these pieces act in unison, we are able to collect “ecosystem intelligence,” referring to information and data obtained from the digital representation of these urban ecosystems that can be used to inform management and planning decisions. The ultimate goal of elucidating ecosystem intelligence is to understand the “language” of urban ecosystem elements and determine how these interact in the urban landscape. This is critical when large amounts of data are needed to model and predict urban stresses and impacts.

The flip side of the coin

The IoN age will harness smart data and smart engagement to amplify nature. In this new era, our ever-present mobile devices can support a holistic approach that includes incentivizing sustainable behaviour, fostering active outdoor lifestyles, and stimulating conservation stewardship. But to be successful, the IoN must also be financially sustainable.

As nations around the world consider post-pandemic stimulus and infrastructure spending, the IoN should sit at the fore of those strategic investments. Fortunately, today’s consumers are demanding a sea change to fund nature-based investments, the outdoors, and climate solutions. Blackrock, JP Morgan, Goldman Sachs, and other top investment banks have now prioritized nature-based investments. The Swiss investment bank UBS recently moved to mainstream sustainability and impact investing as their preferred investment strategy. In addition, the London Stock Exchange created a “green economy mark” to denote companies that derive 50% or more of their revenues from environmental products, services, or solutions. A world of outdoor cities can be achieved if the world of financial markets funds the way.

A new generation of investors has moved impact investing to the mainstream. According to the Global Impact Investing Network, there are 1,340 organizations with $502 billion in impact investing assets worldwide. One such impact investment is an environmental impact bond, which matches investors with green infrastructure projects. In the United States, Quantified Ventures worked with the city of Baltimore and the Chesapeake Bay Foundation to create an impact investment vehicle to fund green infrastructure to manage stormwater. Nature-based systems captured groundwater runoff while keeping nitrogen and other damaging chemicals out of the Chesapeake Bay waters. Green infrastructure provides urban areas with environmental, social, and economic benefits.

While large scale carbon credit deals are becoming more commonplace for the long-term protection of landscape-scale conservation, a new approach includes the aggregation of urban forests and municipal lands. By aggregating smaller urban forests, the scale needed to justify carbon credit financing could be reached. Cities can replicate the model of carbon aggregation programs that have brought farmers and smaller landowners together to reach the scale needed for worthwhile carbon credit financing. The Vermont Land Trust is working with The Nature Conservancy to aggregate the carbon on 14 parcels of land. Participating landowners will receive payments based on their land’s percentage of carbon stored.

As citizens mobilize to build nature-based cities, we also need to mobilize resources. With the alignment of people around ecosystem restoration and the digital financial tools now at our disposal, there is a network dimension of hundreds of millions of people with the willingness and ability to fund the IoN. For instance, consumers are regularly being offered with ways to personally offset their carbon footprint, and thereby fund the environment, especially from airline and travel companies. Delta Airlines dedicates some of the funding collected from customer offsets to protect and foster the Guatemalan Conservation Coast Project.

For the IoN to take off, it must be underpinned by a new sense of stewardship and tending to nature. Technology will be the key driver to do more with less. Technology (and the financial model that will support it) should provide means to better measure, fund, and ultimately, protect urban nature.

We are wholly dependent on nature but need to build a new urban vernacular for nature. We must uncover how we can collectively share the burden to fund nature-based solutions and bring the promise of the outdoors to everyone, everywhere. That’s a responsibility we must all bear.

This piece was co-written by Nadina Galle and John Judge, CEO of the Appalachian Mountain Club and author of The Outdoor Citizen, to explore how technology (and the financial model behind it) can better measure, fund, and ultimately, protect urban nature.