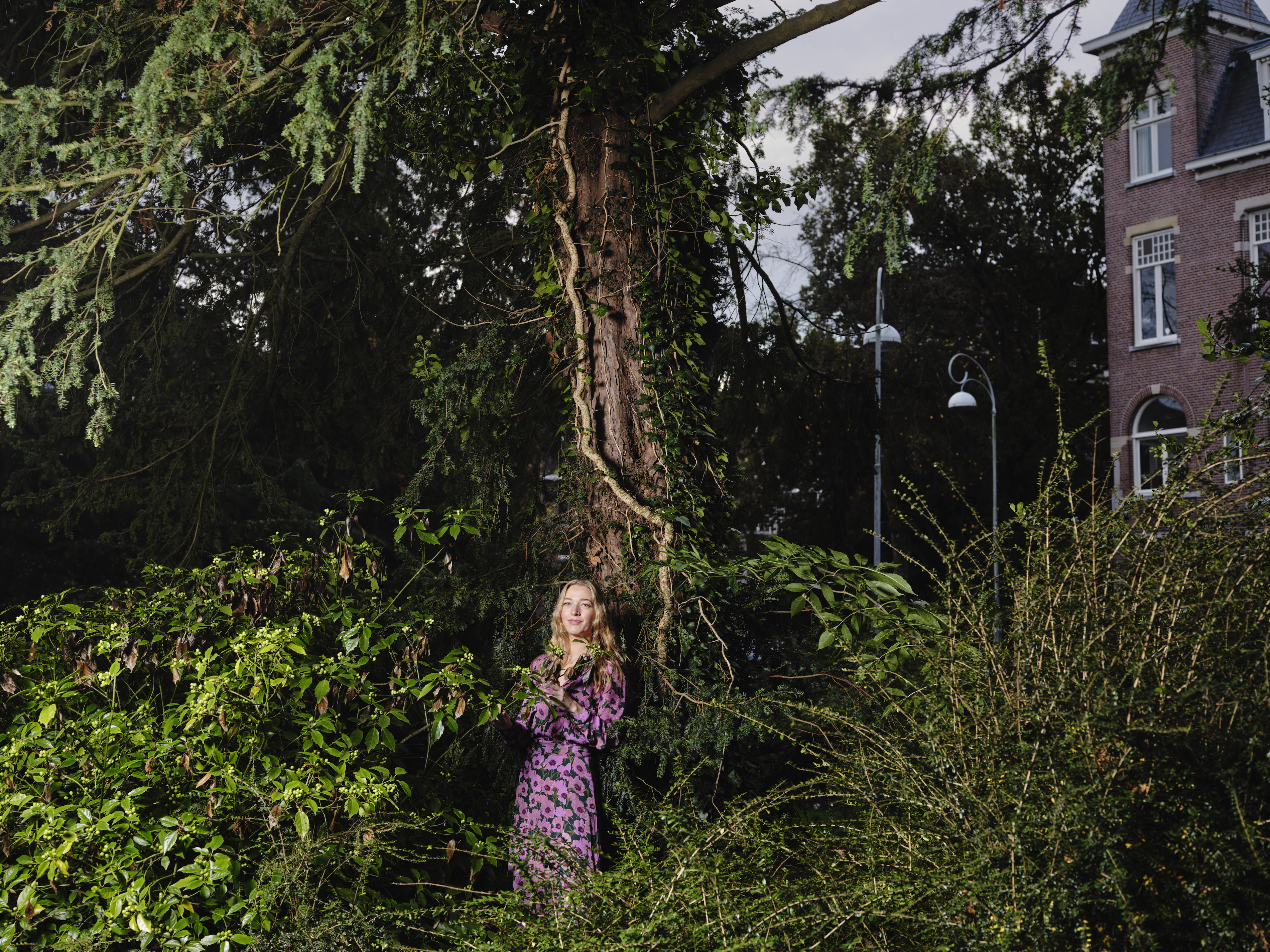 ‍Editor’s note: This article was written by Sander Koenen and originally published in National Geographic in January 2021. The photo was taken by Roger Cremers. Read the original article (in Dutch) here.

Nadina Galle (1992) grew up in a suburb outside the Canadian city of Toronto. It was a typical North American "suburb" where the only green area was the lawn and where you could not get anywhere without a car. "I didn't know any better. That neighbourhood was my world until I saw the documentary The End of Suburbia about the imbalance between humans and nature in urban areas. I discovered then that it's not normal for urban development to swallow up nature and spit out cookie-cooker subdivisions".

Galle’s curiosity was ignited. She studied ecology and evolutionary biology in Toronto, then earth sciences at the University of Amsterdam – the city where she wanted to live as a teenager because everyone cycles to work. She recently defended her PhD at the University College Dublin and Trinity College Dublin on a method that can help ecologists around the world maintain trees in urban areas. Galle's doctoral research marks the beginning of a lifelong personal mission: "I want to build better urban ecosystems using a very typical human invention: technology".

"What do you see?" asks Galle. We walk just outside the Vondelpark in Amsterdam Oud-Zuid. She has chosen the location carefully. In this district, she could show me what her PhD research was about. When I look around, I see stately buildings and luxury cars parked in front of the door. At the edge of the wide pavement, a beautiful row of trees extends to the end of the street. "What do you see?" I reflect on the question. She doesn't have to think long: "This is one of the most beautiful neighbourhoods in Amsterdam, but it is also a highway for tree pests and diseases. I see monoculture. A fight for space. Loneliness".

According to Galle, most people see the city as I see it. Human needs are central, and trees are only aesthetic. For Galle, however, the value of trees is much greater. Trees improve air quality. They absorb water, provide shade, reduce temperature and even influence our mood. Japanese research has shown that people who regularly come into contact with trees experience less stress. "Ask yourself: Do you prefer to cycle to Amsterdam Central Station along the Overtoom or through the Vondelpark? How much nature you encounter along the way determines, in part, the mood you’re in when you arrive at the station".

Galle then shows me the same street through her eyes: Two long rows of Dutch elm trees on either side of the road – trees of one species, all of which are vulnerable when elm disease spreads. Pavement tiles that are flat and crooked because the tree roots do not have enough space to grow normally. And perhaps the biggest problem: The trees are all less than 20 years old. "Young trees are net CO2 emitters. They must be planted, watered and cared for. All in all, this process emits more CO2 than young trees can absorb. Only after a few decades will a city tree yield returns to our ecosystem. But on average, urban trees in the Netherlands are no older than 30 years".

“Only after a few decades does a city tree yield returns for our ecosystem. But on average, such a tree in the Netherlands reaches just 30 years old".

There are also problems that I cannot see, because they are hidden under the streets and sidewalks. In the wild, tree roots have a symbiotic relationship with fungi called mycorrhizae, which enable trees to receive more water and nutrients. In return, the tree's fungi get sugars that help them grow. More than 90% of all trees in the world communicate via mycorrhizae, which make forests self-sufficient. Trees in such forests consequently live for hundreds of years. This, however, is not possible in the city. In her research, Galle examined nearly 300 soil samples from red maples in Boston, USA and found that, "no tree had enough fungi around its roots. Trees in the city – that goes for the trees in Boston as well as those in Amsterdam – are solitary, lonely creatures".

In her PhD research, Galle wanted to develop a new tool for urban ecologists and arborists, an instrument that can accurately and efficiently determine the health of trees in cities. She combined soil samples with data from satellites that monitor Earth day and night using light that humans cannot see: the near infrared. "We can create a vegetation index based on satellite data," said Galle, "That index is a number between -1 and 1 and tells something about the health of a tree. Everything up to 0.2 is a vegetation-free surface, for example, asphalt or buildings. Everything above 0.2 is vegetation. The closer to 1 a tree is, the healthier it is".

Much information can be derived indirectly from the vegetation index, for instance, the possible presence of fungi and CO2 in the soil. As the resolution of satellite instruments continues to improve, it is even possible to create a vegetation index for individual trees in the city. Satellites can use their infrared cameras to identify risk areas: Where does urban nature need attention because things are not going well? Where are trees dead? Do they need to be replaced? "This data can help ecologists and arborists do their jobs more effectively and purposefully".

We continue walking through the streets of Amsterdam and I start to notice how much the city has been shaped according to the needs of people, with trees as mere decoration on street corners or squares. Young trees usually have a post next to them to ensure that they grow straight and with a pipe in the ground to give them water and nutrients. "We're doing everything we can to keep the trees alive," said Galle, "But do we just want trees to survive, or do we want the trees to make a maximum contribution to the ecosystem, that is, the city?" Galle continued, "In nature, an unhealthy ecosystem arises when one species has become too dominant. Humans are the dominant species in the urban ecosystem. We command the system instead of being a part of it".

As far as Galle is concerned, the use of satellite data is only a small step in the search for a new balance between man and nature in the built environment. "We are talking about smart cities in which waste flows, and energy supply and mobility are all controlled based on technology. Why don't we do the same with the greenery in the city? Why have the green city and the smart city not yet found each other?" For Galle, nature cannot and must not lag behind in the digital revolution. She wants to bring nature online through what she calls the "Internet of Nature".

"At the end of my career, 70% of people will live in cities. We still have to build the ecosystems for that. In this way, technology makes people a part of nature again".

Nature and people connected via the internet. The thousands of young linden trees on top of the A2 tunnel in Maastricht, for example, remain healthy because sensors from the TreeMania project continuously monitor minerals, temperature and moisture in the soil. If any value falls below a critical limit, the gardener receives a message that care is needed. Galle envisioned, "In the future, robots will prune the trees fully automatically. In doing so, they relieve people of dangerous work. Moreover, robots, by using satellites, can accurately measure how much of the crown can be pruned without damaging the tree".

During our walk through Oud-Zuid, a car from the municipal parking control passes by. The cameras on the roof register license plates and check the database if parking fees have been paid. "A smart application," said Galle, "You acquire new knowledge by combining data from different sources. This mechanism will be the driving force behind the Internet of Nature".

One such example is Cobra’s “Bomenmonitor” (Tree Monitor). Every day, it maps all the trees in the Netherlands through aerial photos, satellite images, drone images and laser scan data from aircraft. An extension to this is Treepedia, an initiative of MIT's Senseable City Lab, where Galle did part of her PhD research. Treepedia uses images from Google Street View to determine how "green" a city is through the eyes of pedestrians. "If you want to take it a step further, you can equip cars, such as those from parking management and Google Street View, with additional sensors that measure particulate matter in the air and the temperature," said Galle, "Then, in addition to the greenery and the green experience, you also investigate the effect of trees on air quality".

The inhabitants of a city are also a potential source of information. "People can map biodiversity via an app on their smartphone just like the national bird count but, this time, for trees. They can also report via Facebook, Twitter or Instagram the quality of the greenery in their area. Instead of one arborist on a bicycle assessing the city's wildlife, thousands of eyes signal where the time and attention of that same arborist can best go". Galle tested this by interpreting TripAdvisor reviews using artificial intelligence. The computer was able to recognise emotions implied in the text and thus discover what people think of parks. "Instead of asking people to take a survey, we can use this method to obtain information that is already there. People with strong opinions often express them on the internet. The information is already there. You just have to unlock it".

We continue to walk from stately streets with elms in solitary tree pits to the urban green space of the Vondelpark. I realise what Galle meant: People are having fun on the grass, sitting between the trees. A little further on, the Koeweide is closed to the public. In this ecological zone where nature manages itself, people can take a silent walk from time to time. School children also go here to explore nature. "What do you see?" I ask Galle. "Biodiversity," she replies. "Trees more than a hundred years old. Urban nature that can reproduce without human intervention".

If it were up to Galle, cities would be planned differently in the future; there would be more space for nature, including the suburbs of Toronto where her personal search began. "Imagine that everyone in the city has such a place within a 10-minute walk. What would that do for people and nature?" Galle starts to think out loud. "We can plan it with satellite data and an algorithm based on artificial intelligence, not just in Amsterdam but in cities all over the world. At the end of my career, 70% of people will live in cities. We still have to build the ecosystems for that. Then you understand the power of the Internet of Nature: Technology connects people to their ecosystem and makes them part of nature again".

The Internet of Nature starts in the soil