The Internet of Nature starts in the soil 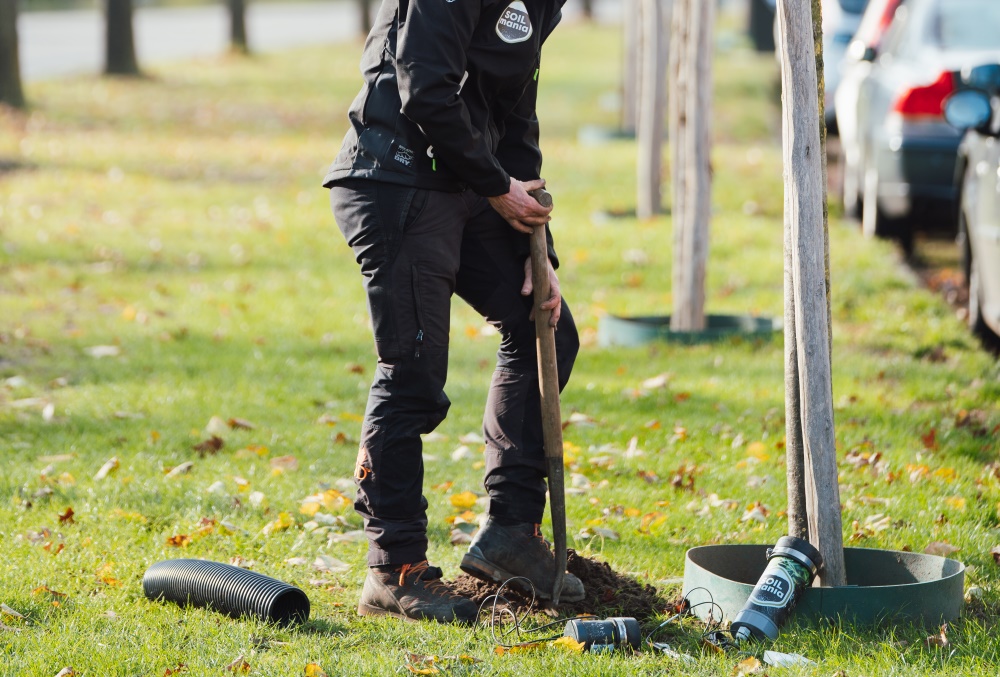 Editor’s note: This article was written by Reinoud Schaatsbergen and originally published in Dutch in Biind Magazine in June 2019.

‍You regularly give lectures and interviews about the concept of the Internet of Nature. What does this concept entail?

“I always start with this: we live in an era of fundamental urbanization in which we have to redesign the ecosystem and the social environment. Nature is part of that. A great inspiration for me is the biologist Menno Schilthuizen of Naturalis and Leiden University. He has written extensively about the Urban Evolution phenomenon and shows that animals and plants in the urban environment evolve into new species. That is nature that tells us: "This is new to me, how do I deal with this?" Too little is said about this profound ecological innovation. "

“Underground there are biological communication networks in which fungi interact with the roots of trees to exchange nutrients, water and CO2, among other things. These fungi, the mycorrhiza, therefore ensure a healthy soil. What we now realize is that urban green is divided into small pieces and therefore this system is not maintained. The mycorrhiza die, causing the soil to deteriorate and trees to die. It is not without reason that an average tree lives seventy to a hundred years in its traditional habitat, but only lives seven years in the city. ”

“We humans are primarily biological beings. We consciously (but also unconsciously) need to interact with plants and animals. We must therefore improve our living environment. Fortunately, the new technologies offer a lot of opportunities. Today we can measure, monitor, index and use algorithms in detail to gain insights quickly and consistently. This can help us, especially for the management of our ecosystem. ”

"It may sound strange, but I see green as part of the city's digital infrastructure."

"The Internet of Nature concept was born from this, linked to the technological trend prevailing in (large) cities. The idea at Internet of Nature is that all pieces of greenery and all animals get a digital representation, both public and private green. In this way you can see in real time what is happening with the greenery and how healthy it is, but human interaction is also shaped in this way. Plants and animals live in the same neighborhoods and parks and people value the interaction. That starts with knowing what is happening around you and whether it looks good or not. Ultimately, the appreciation, the positive awareness of it grows and with it the will and initiative to keep things in order.

“These things are already happening, for example through soil moisture sensors. In the summer of 2018, Limburg was able to use this information to keep almost all trees alive, because they could see exactly where water was needed. A step further is measuring the 'green value'. There are so many people walking through the city, each with an opinion, which they often also share on the internet. Social media such as Facebook, Instagram and Twitter are sources of information that can be collected in a dashboard to see what is being thought of your urban greenery. Both the official park green and a "like" with a photo of a private or neighborhood initiative. These are opportunities that are there for the taking to allow people to interact much more consciously with their "urban forest". "

“Take nature online. It may sound strange, but see green as part of the city's digital system. Ten years ago, the same happened with the metro network and that digital transformation is now happening with smart buildings, lighting systems, waste processing, mobility. Nature has lagged behind, but we are now adding that. ”

"I think it will be very beneficial if we can represent nature in a digital entity and put a price on it."
‍

Why do you think that is?

“People are quite reluctant to connect nature and technology. Nature is seen as something that is wild and must be tamed, while we want to manage the city well. I think that a nice balance can be found in this. What is happening now is that we move nature into the city without creating the environment in which this is done properly and in which animals and plants can evolve. ”

"You may notice that during a storm trees always fall over in the city, but almost none outside the city. That is partly a soil problem."

"This problem starts with the phenomenon that we want to bring nature back to the city. Then you assume that nature was once in the city, which of course is not the case. First there was nature, then there was urban development. The two will only go together when we gain insight into how to care for urban nature in such a way that both humans and nature feel comfortable with and can reproduce. I think we can do that with technology. ”
‍

I can imagine that the digitization and quantification of every piece of green entails a risk that we will see green as capital. How do you feel about that?

“I think - and this is very controversial in ecology - it will be very beneficial if we can represent nature in a digital entity and put a price on it. We are biological beings in a social and capitalist system, and that is not going to change anytime soon. We already give greenery a value, you can see that in the house prices at the Vondelpark, for example, but management is still very expensive. You put a lot in it and that does not return as money. That creates uncertainty. ”

“Suppose you can measure how much air a tree cleans, how much rainwater it absorbs, how much coolness it creates. If you put a price on that, you can easily visualize the savings by comparing the green with the costs of the gray alternative for a solution to those problems. You can also use that data to talk to insurance companies. The value of a tree in your yard can easily exceed the risk of it falling and causing damage. ”
‍

Which has to do with the soil again, right?

“Exactly. If you have insight into how (un) healthy a soil is, you can quantify that. A tree in healthy soil is worth a lot more, because there is less chance of it falling. You may notice that during a storm trees always fall over in the city, but almost not outside the city. That is a soil problem: the root system has not been able to expand sufficiently. A storm is then the last straw. You can see it for yourself around the Oude Kerk in Amsterdam, where a sixty-year-old tree was blown down in June. The trunk is still there in a ground of almost only sand. ”

"The most important people in this story are not scientists. It's the people with their hands in the soil. "

“We need to see green as any other kind of infrastructure, instead of just attaching an aesthetic value to it. I understand that that is difficult to quantify, because you are not talking about a building made of concrete but about a living thing, but we have already proven enough in the literature that an average tree of type x and of age y provides countless services. Of course a tree is more than that, but if we want nature to play a part in our current system, then we have to do it this way. ”

What can we do now to make the city and nature coexist better?

“We have passed the time of activism. My discipline Ecological Engineering of has grown up. There is a lot of work. If you are busy with urban planning and you do not know how the underlying ecological systems work, then you may have the best intentions, but then you cannot oversee the consequences. Enough examples. We work with world cities such as Jakarta and Tokyo, which not only suffer from rising water, but from a sinking surface. If you don't take good care of your soil, you don't have soil to build on. Better and more complete models are needed.”
‍

"Arborists are just like that, they are incredibly inspiring. As a biologist you can know everything about how the cells of trees and plants work, but that is theory. An arborist takes that knowledge and applies it immediately. They are really arborists. I think a collaboration with arborists can yield a lot, because we often only look at two thirds of a tree, while the last third is hidden underground. ”

“The most important people in this story are not scientists. It is the people who work on the ground, the ecologists, the arborists, the green managers and especially the people in the neighborhoods who take care of their greenery. They have the knowledge and they have to deal with the problems and invest the energy to continuously improve our ecosystem. Let us realize that above all. ”

TEDx talk: Cities and the #InternetofNature