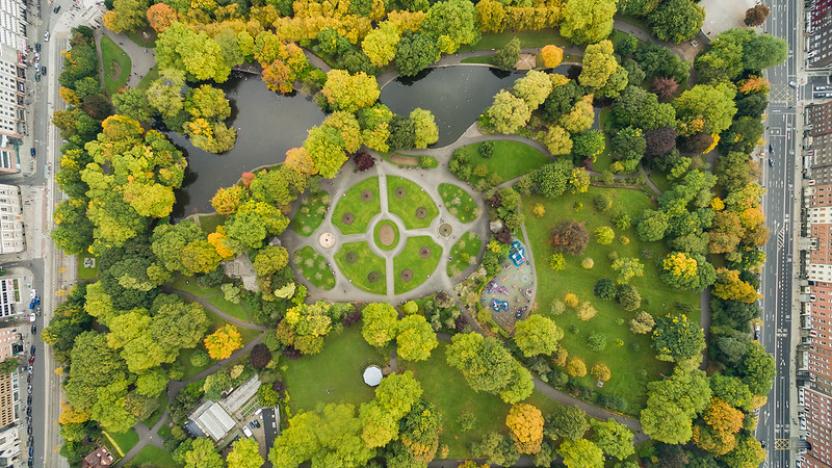 Editor’s note: This article was written by Katia Mullova and originally published in RESET in November 2020.

On the face of it, planting trees is a great strategy to regenerate and take care of the environment. Forests absorb carbon, support biodiversity and positively impact our mental health, so any initiative to repopulate deforested areas with trees, or introduce greenery to urban spaces seems like a no-brainer. In practice, creating new forests takes more than simply putting a seed in the ground. While tree planting is one thing, keeping those trees alive and well is another altogether. In the wild, trees are supported by huge underground networks of fungi, bacteria and plant roots to form what is sometimes known as the 'wood wide web'. This network provides important channels through which trees can exchange not only soil nutrients, but also vital information about their ecological surroundings.

In the absence of these subterranean systems—which develop over centuries of coexistence and symbiosis—it becomes more challenging for young trees to survive in cities. Up against the added pressures of an urban environment, like traffic emissions,  littering, and a lack of space for their roots to grow, a tree with a normal lifespan of over 130 years might live to see just seven on a city street. Ultimately, trees need help to grow well in urban spaces. And while cities continue to integrate digital innovations into their waste management, mobility and even into their lighting systems, urban forestry has long been left behind, usually relying on low-fi, time-intensive and inefficient solutions and outdated, inaccurate data.

That’s where Green City Watch comes in. Since 2018, this Amsterdam-based open-source initiative has been using an emerging scientific discipline called geospatial artificial intelligence (or geoAI) technology, which combines ecological engineering, machine learning techniques, and remote sensing methods, to provide insights into the health and wellbeing of urban greenery; as well as identifying where the most impact can be achieved when constructing new green spaces.   “These city trees are very much alive!” Co-founder Nadina Galle notes. “But their natural communication networks have been disrupted: they’re planted in these silos rather than as part of a connected ecosystem. So we’re using technology to understand and step in where the urban setting has created those disruptions.”

Giving city trees a digital health check—from up above

Green City Watch’s flagship product is TreeTect, an an open-source software that uses satellite imagery and machine learning to gather information on the numbers and health of urban trees and tree canopy, and allows users to create an AI-enabled digital tree inventory. By making use of very high-resolution (VHR) satellite imagery, TreeTect is able to scan vast areas of city terrain to monitor both the quantity and the quality of green space in cities. Previously, this technology could only measure data sets down to a resolution of 10m², which is helpful if you want to locate green patches in a grey city—but not very helpful in clarifying what those green areas indicate. Now, this technology can measure down to each square metre of land, and the tree-detection algorithm can figure out not just where the city's parks are, but whether they’re looking at a green tree, shrubs, bushes or a green garden shed. This means it is able to pinpoint the location, size, shape - and even health -  of individual trees in near real-time.

Each tree has a unique "spectral signature" and looking at hyperspectral snapshots of them can offer important insights about their health. These images are usually taken by satellites, or sometimes UAVs, such as drones, and measure reflected energy within several specific sections (also called bands) of the electromagnetic spectrum. They can show how much visible light (from 0.4 to 0.7 µm) is absorbed by the plant leaves and how much is reflected. Vegetation health, like that of trees, can be estimated by measuring the difference between how near-infrared (which healthy vegetation strongly reflects) and red light (which healthy vegetation, and especially the chlorophyll within it, strongly absorbs) is reflected. This is just one key marker of healthy tree behaviour. Using this information, urban foresters are able to better understand which trees need the most urgent care on the ground and better target their conservation efforts in an efficient and cost-effective way.

The level of detail offered by modern satellite imagery can reveal a lot about the state of the green space—for example, where there are drainage barriers which might cause flooding; or whether the green/grey ratio of cities is in balance. When combined with information on the number playgrounds and green spaces to walk and sit, it can also provide information about the social significance of an area. These findings are significant to a wide range of users, not just foresters and arborists: data scientists, local residents and policymakers can all use this data to understand urban environments more comprehensively, manage their green spaces and better measure the success of urban greening projects.

In fact, as many as 50-70% of city trees are growing on private land, which means that rather than being cared for by the local municipalities (as many believe them to be) these trees are somewhat off the radar. Communities have limited authority to care for existing trees or grow new ones. Furthermore, old trees are subject to the whims of private landowners, and even though technically a permit is needed to cut trees over eighty years old, this is difficult to regulate. “When you hear about deforestation you tend to think of the Amazon, or Borneo, but it’s actually just happening right in front of people here.” Galle points out. “We need to restore the sense of value in trees and recognise that these are critical parts of our urban landscapes, which can’t be easily replaced.”

Technology in service of nature

Green City Watch incorporates visual insights from a range of different sources - including Sentinel-1 Synthetic Aperture Radar imagery, Sentinel-2 Multi Spectral Imagery, commercial imagery from Maxar Technologies and Planet Labs, as well as images made by drones. And in order to uncover the meaning behind the data, they combine their ecological engineering and remote sensing methods with machine learning techniques. Applying AI algorithms to harness and process GIS (geographical information systems) data makes it possible to analyse and visualise spaces on a vast scale through automation, as well as consistently monitoring changes to green spaces over longer periods of time. AI can also extract patterns from large volumes of data that would otherwise be missed by human analysts, or would simply take too long to analyse.

So far, Green City Watch has worked with over 30 cities around the world, from their home in Amsterdam all the way to Jakarta. They have collaborated with the World Bank's City Planning Labs (CPL) to identify intervention hotspots and opportunities in 26 of Indonesia's most populous cities by mapping the green and blue spaces there. In Tbilisi, Georgia, Green City Watch has supplied information about land quality to local authorities considering the construction of new parks; and in their native Amsterdam they used remote sensing techniques to map standing water in the city, which helped them calculate flood risks.

RESET was curious to hear Galle’s thoughts on the relationship between nature and digitalisation from a more philosophical perspective. To some, applying emerging technologies to protect nature might seem counterintuitive. To use one of the project’s maxims, how can we “revolutionise the way we value nature” without erasing more traditional or tactile ways of appreciating it? “I think people often misinterpret this as trying to digitalise everything for the sake of digitalising everything,” Galle says. “But it’s not really about the technology—the technology is just a means, and we’re very critical about what works and what doesn’t.” She stresses the importance of falling in love with the problem rather than getting “so attached to a solution that you start losing a sense of why you stepped into that field in the first place". Keeping a creative, adaptive mindset helps them act in service of nature rather than in service of technology.

At the root of Green City Watch lies the desire is to nurture healthy relationships between human communities and local forestry. Galle emphasises the idea of 'tree stewardship', whereby locals take an active interest in the trees they see every day. This has risen to prominence during the Coronavirus pandemic: with a newfound sense of value in going outside and getting fresh air, people are using local tree-mapping apps to locate and identify different tree species in their neighbourhoods and in Germany, even organising with their neighbours to work out a tree-watering rota. “It’s a fantastic way to get the community to engage in tree stewardship,” Galle explains, “and also gets people into the habit of paying attention to their local forestry.” Encouraging locals to keep tabs on their surrounding trees makes them more invested in their longevity, almost like a neighbourhood tree-watch initiative.

To Galle, applying digital technologies to nature has the power to narrow the gap between humanity and nature. “Every human being has the right to have nature on their doorstep. We have to move away from this ‘Us vs. Wilderness’ mentality.” It’s not enough to plant seeds and hope that nature will take care of the rest: we need to pay more attention, understand the way trees interact with urban landscapes more fully, and help them to thrive. Not only will this make it easier for city councils to invest whole-heartedly in their green spaces, but also for trees to survive climate change and the new environments presented by the anthropocene.