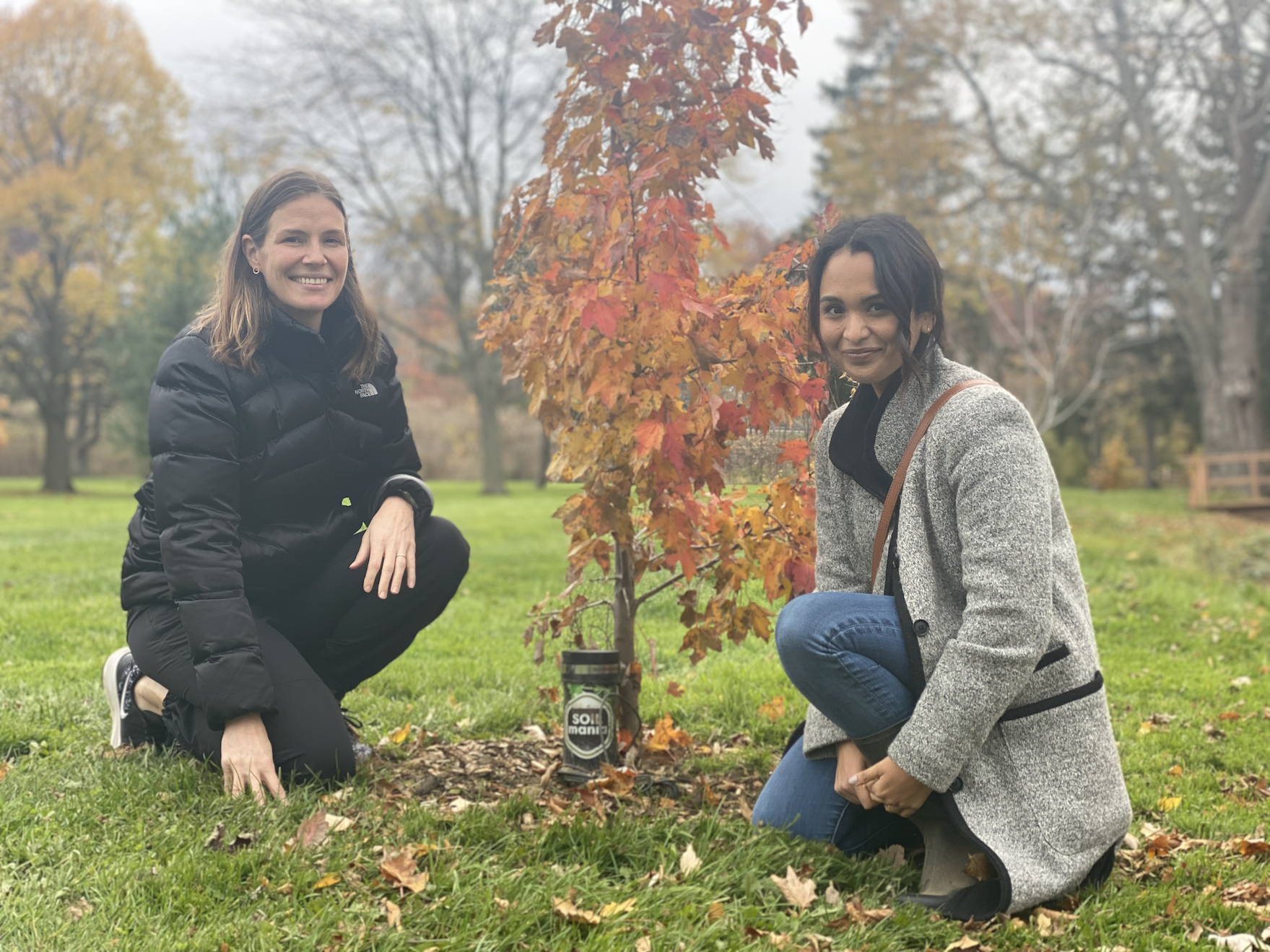 Darby McGrath (left) and Charlene Williams (right) on the Vineland Research and Innovation Centre campus with one of their soil life sensors.‍

While on site visit in Lincoln, Ontario, I got the opportunity to see my work with SoilMania in action at Canada’s Vineland Research and Innovation Centre. As an independent NGO, Vineland’s success relies on tangible results for its clients and the horticulture industry that it serves. Here’s what I learned about how Vineland uses SoilMania’s soil life sensors in their research.

“These trees were once used in one of our trials, now they’re thriving in their forever home, here on the Vineland campus,” I’m sitting with Darby McGrath and Charlene Williams, senior research scientist and research technician for Environmental Horticulture, respectively, at the Vineland Research and Innovation Centre. They've just given me a tour of Vineland when we sit down at a picnic table, surrounded by mature maples, so I can ask them a few questions about working with SoilMania.

Ironically, Darby and her team first purchased SoilMania’s soil life sensors to monitor a drought tree trial, but a rainy Ontario summer turned those plans on its head, accidentally turning the drought trial into a water-logging trial. “That’s why the soil life sensors became so interesting to us,” says Darby, “because they also measure soil oxygen.”

SoilMania combines decades of experience in soil biology and arboriculture with the Internet of Things (IoT) and artificial intelligence to create its state-of-the-art soil life sensors which measure moisture, temperature, electrical conductivity (salinity), pH, and oxygen.

“Even when we originally scoured the available technologies,” says Darby, “we couldn’t find anything that measures oxygen like the soil life sensor does.”

Why oxygen? It’ll come as no surprise that oxygen is a key factor in successful tree growth, but it is often overlooked. In fact, we’re often so focused on using sensors to optimize irrigation, we forget it can help us better understand over-watering, too.

“Using the sensors, the data has shown us the relationship between the amount of oxygen in the soil and the amount of water that's available in soil,” says Charlene. Turns out, there’s a critical relationship here. Once water reaches a certain level, you lose respiration (meaning the soil can no longer “breathe”) which can have disastrous impacts on the trees.

Weirdly enough, the symptoms of a waterlogged tree and that of drought-stricken tree look nearly identical. Dry, drooping, browning leaves. And even if you accurately spot the damage on a tree, by the time you do, it’s often too late to save it. “This is exactly the problem,” Darby sighs, “how are you supposed to know what's really wrong without looking at the soil? We’ve got to start looking below the surface.”

The thing is: soil’s not sexy. Soil has had a bad publicist, desperately in need of a PR overhaul. That’s where sensors also help. “Using sensors can help planners, arborists, and developers get the soil right first,” Darby explains, “otherwise, you’re only creating a bigger headache for yourself down the line.”

That’s where the dashboards come in. Critical, because we can’t expect people to become soil scientists overnight, or ever. “The dashboards take away the stress of having to interpret the data,” says Charlene, “making it accessible to everyone involved so we can create and maintain better growing conditions for trees.”

Even so, the uptake of soil life sensors in Canada is in its infancy. But according to Darby and Charlene, that’s not a product issue, but a mindset shift. Darby explains, “I feel like, in Canada, we’re at an important ‘pre-sensor’ step. But it's an important step, because what we hear from cities constantly, is just that they don't have the value proposition to do things differently. And so if we can connect the dots for them with the evidence base, making the case that soils with these qualities result in these tangible longevity impacts on trees, and sensors can help measure that, then that's the case to do things differently.”

Being open to the use of sensors is almost like a litmus test for how far cities are in their soil journey. “A city won’t invest in sensors if it doesn’t recognize the importance of soil health for tree health.”

For those cities that are ready to dig deep (pun intended), Darby and Charlene have some advice:

We’ve always known urban trees were dying early deaths. We didn’t always know why. Now we do, and the good news is: the deaths are preventable. We simply need to apply the tools at our disposal to diagnose and take action, before we lose the lifeline of our urban future.