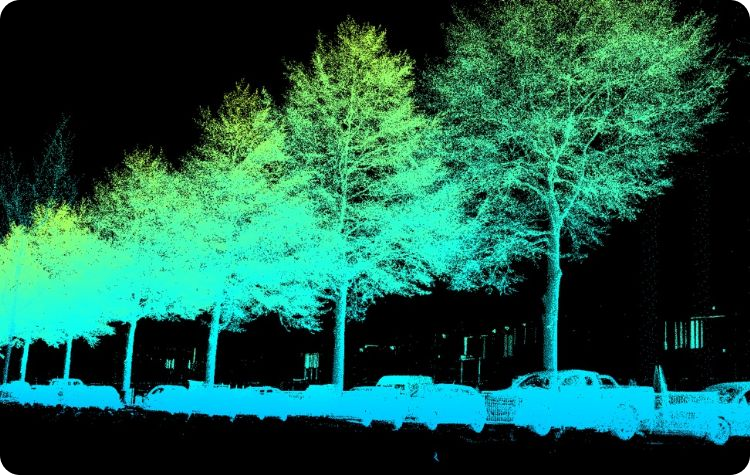 ‍Editor’s note: This article was originally published in Landscape Trades in December 2022.‍

In this new regular column for Landscape Trades, Nadina will spotlight Internet of Nature (IoN) technologies and practitioners making a difference in how we can optimize soil health, manage urban forests, create liveable cities, and everything in between.

One of my mentors, renowned tree biologist Dr. Andrew Hirons, once said to me, “Don’t tell me how many trees you planted today, tell me how many will still be there in 50 years.” His advice, in part, ignited my fascination for the preservation of old trees. I am unable to pass by a mammoth of a trunk without stopping to beam, or walk by an enormous crown without admiring its far-reaching branches. My favourite trees are those you can’t wrap your arms around all the way.

Old trees that have their roots close to human settlements are even more fascinating to me. The joys they’ve seen. The atrocities they’ve lived through. The generations of people they’ve witnessed come and go. Old trees are living bridges from the past to the future. They were here before we were born and, hopefully, they will still be there when we pass on.

The number of old trees in the Netherlands, however, is growing alarmingly low. Compared to the rest of Europe, and contrary to popular belief, the Netherlands doesn’t have the best reputation when it comes to protecting older trees. Some blame it on previously lax tree ordinances, others on the country’s density — a so-called lack of space (or priorities). And others yet again on the “innovative spirit” of the Dutch, a culture that prides itself on revamping and uprooting its infrastructure so frequently that trees inevitably get “in the way.”

The oldest trees in the Netherlands are between 300 to 400 years old, but only a handful remain. The oldest is assessed to be a 400-year-old lime tree located in the southeastern corner of the country in a small town called Sambeek. Not only is it the titleholder for the oldest, but also for the thickest: its trunk has a stunning circumference of 7.9 metres! My back-of-the-envelope calculation estimates that you’d need around five hand-in-hand adults to give the tree a proper hug.

To speak for the trees?

In the face of more frequent storms, droughts and heatwaves, the need to protect older trees has never been greater.

That is why, six months ago, I was thrilled to get a call from Dirk Doornenbal, managing director of De Nationale Bomenbank (National Tree Bank), a leading tree care company in the Netherlands, and Henry Kuppen, managing director of Terra Nostra, a knowledge centre for trees and soil. Dirk and Henry had teamed up to celebrate De Nationale Bomenbank’s 50th anniversary in a unique way: by asking the public to nominate their favourite trees.

These nominations (ultimately 98 were submitted) would be narrowed down to the top 50. Dirk and Henry wanted me, along with three other “professional treehugger” jury members, to select the top five. I was honoured. These top five gentle giants would not only get the attention they so deserved, but, more importantly, lifelong tree care to ensure they would be there for generations to come.

This project was deeply personal for De Nationale Bomenbank. The organization has made its name in the competitive tree care space due to their talent and skill in preserving, transplanting, and, often, saving very large, very old trees. They, like no other, understand the critical importance of preserving what we have, rather than focusing primarily on planting new trees.

In September, we selected the top five, and each jury member was able to choose one of the trees to act as its “ambassador.” I chose “Lucky Charm,” a 150-year-old lime tree which stands on a backyard property line, now shared by two neighbours who are proud to discuss its heritage. According to the tree’s “owner,” Ton Rotteveel, a woman in hiding during the Second World War used to climb out of her attic window under the cloak of the tree’s crown, finding peace in the chaos. Ton insists the tree continues to bring him and his family luck to this day.

What big, old trees can do for you

It’s not only luck that “Lucky Charm” is providing, but many other hidden benefits. For over two decades, we’ve known — academically, that is — that the bigger the tree, the bigger the benefits. The obvious reason is that there’s simply more tree to go around!

Ecologically, it adds up. Health and well-being-wise, it checks out. But the economics make sense too. Since 2004, we’ve known bigger trees also mean bigger savings. The USFS Center for Urban Forest Research found that the benefits of large-statured trees far outweigh the costs of caring for them, sometimes as much as eight to one.

Sure, large species like London planes, beech, and oak need expensive, carefully-engineered tree pits to help them grow safely, particularly when surrounded by pavement. Such costs are more than offset, though, when we properly value the benefits these trees provide.

Since 2005, thousands of communities, non-profits, consultants, volunteers, and students from around the world have used i-Tree, a state-of-the-art, peer-reviewed software suite from the USDA Forest Service, to calculate the benefits of trees. i-Tree has undoubtedly changed the face of urban forestry for the better, but it remains a model, and like any model, its output is only as good as its input. And, right now, in too many cities, tree input data is too out-of-date or inaccurate to properly calculate tree benefits.

So, tree benefits get lost, and the focus turns simply to planting trees, because more trees is better than fewer trees, right? Wrong.

A broader view of broadleaf trees

What if, instead of “stems planted,” we built urban forestry programs around maximizing crown volume, inherently optimizing for older, bigger trees? What would such a community look like? And most importantly, how would we map, monitor, and incentivize crown volume growth?

Such a community might look like Woerden, a small city of 50,000 people south of Amsterdam, which mapped its 30,000 trees in just four days, a process that took two years before Dirk van Riel from Treetracker came along.

Treetracker uses LiDAR sensors on top of cars (or backpacks if on foot) to map its surroundings and developed a deep learning algorithm to filter out everything except trees. When the programme is finished, a data set of each tree’s location, trunk diameter, height, and crown volume remains. With that kind of up-to-date input, i-Tree gets a lot more exciting.

Last summer, I sat down with Ronald van den Brink, leader of the “Green Engine” pilot project in Woerden and four other municipalities, to learn more about the city’s approach to measuring the success of its urban forest. Ronald sees the urban forest as a city’s “green engine” — an engine which only operates at peak performance when trees are healthy, large and old.

“With Treetracker, we’ve built up a huge database of half a million trees in recent years,” Ronald said. “This allows us to analyze how growth progresses under good growing conditions for different tree species: what trunk diameter, tree height or crown diameter does such a ‘model tree’ have after 10, 20, 30, 40 years, and so on?” That data is now allowing him to compare existing trees with these ‘model trees,’ so city councils can more easily calculate the tree benefits they’re missing out on — and take action before we lose more old trees.

As for the City of Woerden, they said goodbye to rigid mandates to plant a certain number of trees each year. Instead of the number of trees, each tree’s crown volume and the future value of that tree is the city forest’s new key indicator of success.

In an era of million, billion, and even trillion tree-planting campaigns, I think it’s a lesson we can all learn from.