Trees can talk: are we listening? 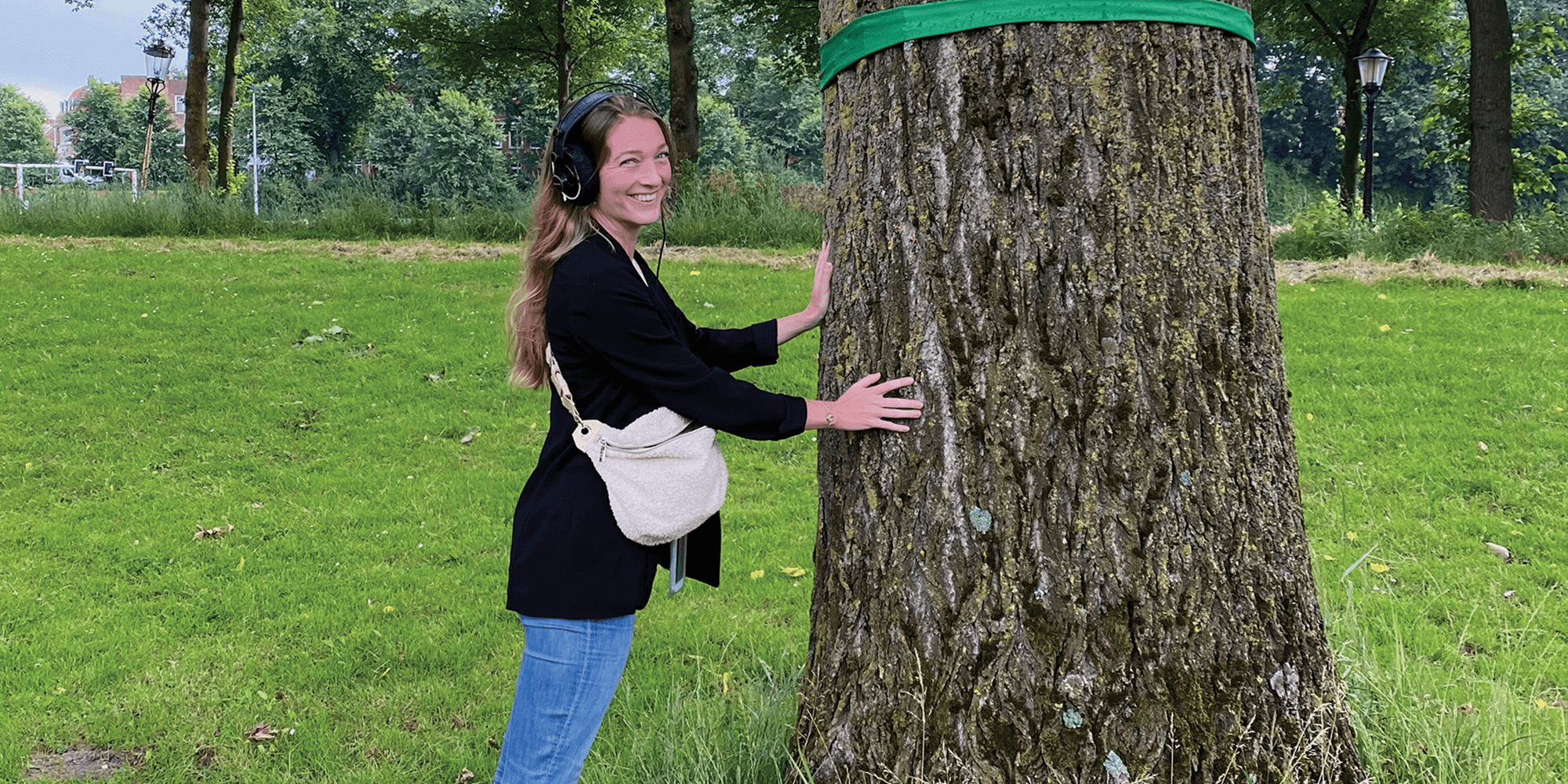 ‍Editor’s note: This article was originally published in Landscape Trades in August 2022.‍

In this new regular column for Landscape Trades, Nadina will spotlight Internet of Nature (IoN) technologies and practitioners making a difference in how we can optimize soil health, manage urban forests, create liveable cities, and everything in between.

I grew up in Waterloo, Ont. Like many suburbs, what we might’ve lacked in sidewalks, public transit, and culture, we made up for with an abundance of space — both above and below ground. When I was 10, on Maple Leaf Day (or Arbor Day, to the rest of the world), my school organised a tree-planting campaign. Parents had complained of sweltering hot conditions in the school “yard,” which was largely made up of asphalt and concrete. I can remember huddling in the shade of the school building rather than playing.

The campaign was a resounding success. A small forest was planted, with 1,600 trees and shrubs in total. I hadn’t thought about it until a recent visit home when I saw a boy playing hide-and-seek behind a tree I had planted when I was his age.

To this day, I remember how easy that planting day was. Pick a spot, dig a hole, lug the sapling in, cover it with soil, and water it, not too much, but just enough. “Why didn’t we do this sooner?” I remember thinking.

Although I didn’t know it then, that day was one of many that inspired my career in ecological engineering. Two decades later, and after having lived in big cities like Toronto, Boston, Singapore, and Amsterdam (home to some of the world’s most ambitious urban forests), I’ve learned that planting urban trees is anything but easy. With stiff competition for space, compacted and polluted soil, and less-than-favourable attitudes toward trees, my 10-year-old self wouldn’t have gotten very far.

Focus on growing, not planting trees

Setting the ambition, however, isn’t hard. By 2030, Milan plans to plant three million trees, Houston pledged 4.6 million, Sydney five million, and Shanghai, two million, representing  each of the city’s kids. In Canada, although not an urban goal, the federal government is two years and only 29 million trees into it’s promise to plant two billion trees by 2030.

When saplings are neglected, maintenance efforts quickly fall on residents, further exacerbating tensions between city officials and citizens around ownership and responsibility for trees.

In short, we need a better strategy than I had at 10: sticking sticks in the ground and hoping for the best. What if we didn’t focus on planting trees, but on growing them instead?

That would likely mean a lot fewer stems in the ground, but a lot more canopy cover in decades time. And that, according to the research, is where the good stuff is. A recent large-scale study by KU Leuven concluded one large tree with a robust crown has more impact on human health and well-being than 10 young trees. Another study from the University of Hamburg shows the older a tree is, the better it absorbs carbon. In fact, the study demonstrates almost 70 per cent of all the carbon stored in trees is accumulated in the last half of their lives.

How can we ensure the success of fewer centenarian trees, rather than an army of youngsters? The key to success lies underneath our feet. By building better tree beds, reserving below ground space at an early stage, and ensuring soil health rich with microorganisms, trees can thrive, even when faced with car exhaust, urinating pets, and increasingly unpredictable weather events.

But even if the soil conditions are ideal for planting, tree care managers and citizens require more information to ensure conditions stay ideal for growing. Rather than hoping for the best, we can realise the best, by gaining insight from below ground.

Scientists have long known that where cities haven’t disrupted them, nearly all plant species have a mutually beneficial relationship with soil fungi called mycorrhizae. Some call it the “wood wide web” because it functions as a communication network. The fungi absorb nutrients from the soil, like nitrogen and phosphorus, which plants struggle to extract on their own. They exchange them for carbon, which fungi need to survive. I call it the world’s longest-standing trade agreement.

Sensors offer a way to plug into this “wood wide web,” and have become one of the mainstays of my practice “Internet of Nature” (IoN), which seeks to uncover how emerging technologies can help officials, practitioners, and citizens manage — and connect to — urban ecology.

By offering a direct line of communication, sensors can help translate trees’ needs to human intervention. For the past five years, I’ve been advising municipalities, contractors, private estates, and even theme parks like Disney World, on how sensors can play an important role in their overall tree maintenance operations.

In the Netherlands, where I am now based, it has become the rule rather than the exception that 15-20 per cent of all trees planted die within their first year. The primary cause? Too little or too much water.

That was the case in the City of Maastricht, in the south of the Netherlands, where 1,000 linden trees were planted on top of a newly-built tunnel in a two-metre deep metal “box.” These trees — as is becoming increasingly commonplace in dense urban cores wanting to reforest — have no chance of ever reaching groundwater and thus, must be carefully monitored.

In collaboration with the municipality and soil sensor company SoilMania, we installed three soil moisture sensors. Wildly skeptical, the contractor ran a small experiment. On top of the tunnel, he only watered when and where the sensors told him to. On a similar site with the same soil, trees, and conditions, the contractor watered like he always had, armed with a nursery schedule and good old-fashioned intuition.

In an era of changing seasonal patterns, the results showed intuition alone was no longer enough. After three years and two heat waves, the no-sensor site had lost a fifth of its trees, while the sensor site hadn’t lost a single one. The contractor was thrilled, having no trees to replace. The municipality was ecstatic, investing in another 40 sensors to install across the city. The residents breathed easy, knowing the trees would be there for generations, not seasons.

Moisture is an important piece of the soil health puzzle, but it’s not everything. Luckily, these sensors can also measure electrical conductivity, which is helping to alert caretakers to remove excess road salt in tree pits, before it kills street trees. Or oxygen, which is helping researchers at Ontario-based Vineland Research and Innovation Centre to understand the risks of over-watering, an often silent killer of trees. Or pH, which provides an early warning sign of heavy metal accumulation.

The moral of the story here is not to put a sensor by every tree. In fact, to take care of those 1,000 lindens only three sensors were used. Each site is different and at each site we ask ourselves: what is the minimum amount of sensors for the greatest impact? It’s something I ask myself about all IoN technologies: what is the minimum amount of technology I can use to achieve the biggest impact?

The real moral is learning from the insights gleaned, so tree care managers and citizens may even one day render the sensors obsolete. Artificial intelligence gets us one step further. By developing a prediction algorithm, we are now beginning to understand not only that a certain zone of trees needs water today, but that it will likely need 150 litres of water in 48 hours. Or organic matter in three days. Or humic acid in five days. When we do that, we can transform tree care from a reactive to a proactive practice.

The technology to hear trees is here, but the question remains: will practitioners learn to trust it, so we can all listen?